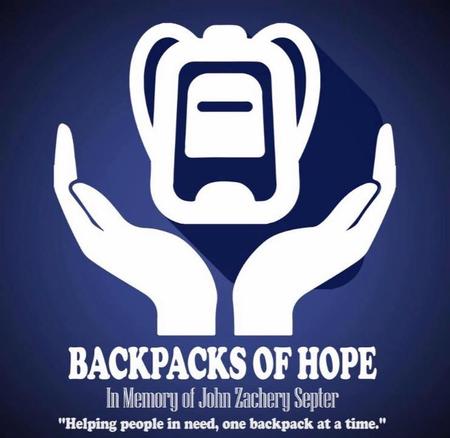 in loving memory of

Making a difference one backpack at a time. Help us give a hand up to people in need.

Zachery was 21 when he lost his life in an accidental drowning.  Zachery always had an unconditional love for others and strong faith in God. It wasn't until he passed away that we truly understood the extent and power of his love and faith.

As a mother I felt as though I was always trying to keep him safe.  He had an impulsive disorder and it was so hard to keep him in one place.  About a year before his death he decided he wanted to spend time with the homeless in Fort Wayne.  He started eating and sleeping with the homeless and befriending people in need.  Everyday he had stories to tell me about people in need and wanted to figure out ways to feed them and give them clothes.  I was so worried for his safety, but he was determined to show the homeless community love, hope and faith.  The stories that followed his death overwhelmed us.  There was an outpouring of people contacting us about how he touched their lives and how he brought God into their lives.

As we were preparing for Zachery's funeral we truly had no idea of what the coming days would bring.  We were still in shock and just devastated that our loving Zachery was gone.  He was so full of life, love and joy.

As the viewing started, the lines of people just started coming in.  All walks of life and the stories of his ability to love and make a difference in peoples' lives started.  We weren't the only ones surprised by what Zachery was doing.  The community of people in need thought he was one of them.  He never let them know otherwise.  We heard person after person tell us he listened to me, he did not judge me, he was my friend.  I wish I could share every story with you that we've heard.  From he stayed with me while I was in the hospital.  He gave me hope.  Two young men from a gang said he was trying to bring God into their gang.  The one young man said we thought we were protecting him and he was saving us.  They pulled back their shirts and they had crosses with his name beside it.  I told them to continue what Zachery started to get away from the gang and start a new life with their new faith and hope for a better life.

Over a 1000 people came through his viewing and funeral.  As a family there are no words for the pride we felt.  Zachery was so humble. I am sure he had no idea the beautiful things he was doing.  He was just being Zach.  At that point we knew we had to continue his journey of love.

The second part of Zachery's mission or story is he had his own struggles.  With his impulsive disorder life wasn't always easy for him.  He had his troubles and struggles.  Our message to everyone reading this is that it doesn't matter who you are or what you have, you can make a difference in this world.

The creation of the Backpacks of Hope:

The Rescue Mission of Fort Wayne reached out to us to tell us what an impact he was making at the mission and he was like another counselor.  We asked if we could pay if forward and put backpacks together and give them out before Christmas the year Zachery passed away Dec 2011.  They welcomed us into their family.  We collected about 50 backpacks for people in need and filled them with items they would need for the winter.  We also brought coats and food.  To our surprise the number of people that showed up was over 200.  I had no clue how many people came to the mission for help on a daily bases.

In March 2012 the Rescue Mission honored Zachery by letting us continue the backpacks project in his name as an annual event.  Zachery has two younger siblings, Allie and Jacob.  We together as a family came up with the name "Backpacks of Hope" in memory of John Zachery Septer.  Zachery was just the type of kid that wanted others to know they were loved and there was always hope.  He use to always say "Trust in the Lord with all your heart" when things got hard.